The Beauty of The Space Between – Visiting the Art Fairs 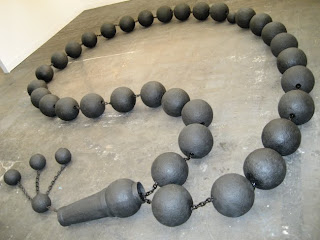 The work that seemed to me to be able to hold its own in the cluttered environment of the Art Fairs this weekend in NYC were pieces that had, at their center, an open-endedness or spaciousness – not a lack, but a loaded emptiness – a meaningful sense of space. There was the giant loop of Mona Hatoum’s Worry Beads, implying without illustrating a human presence, series of gestures, and sense of ritual. 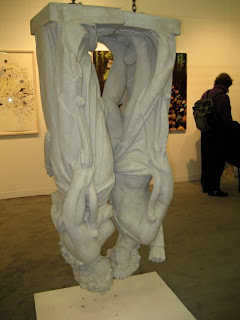 There was the space between the two upside-down dangling figures in Jonathan Schipper’s To Dust, which, as they gently swayed, grated bits of cement off of each other’s surfaces – a reflection on relationships and perhaps time. There was also the cobweb of glass and gourds spilling from the snout of Rina Banerjee’s taxadermied gazelle head, stretching toward a knickknack globe on a little stand. The disparate objects were joined together to shape an implied set of symbolisms some of which related to colonialism and conquest, but the totality of which evaded any one specific interpretation. The meaning happened between the objects in the space that the viewer could construct – leaping visually and associatively from object to object and forming connections. In each of these pieces what wasn’t said or done was as significant as what was. 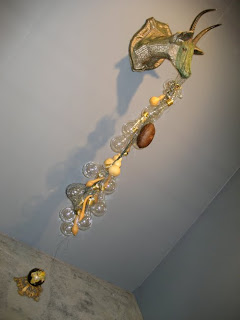 Heather Cantrell representing Kinkead Contemporary at the Volta show created a scenario that viewers were literally invited to step into. The piece was comprised of a painted Rousseau-like jungle environment – an cluttered green floor filled with a couple of stumps, plants, backdrops, and strategically placed mirrors. You could pose to have a black and white Polaroid taken in the jungle surroundings with the artist reflected in the photo as well. There were a number of props and masks available for use. This was a creative psychological space between the artist and participant in which a variety of scenarios could happen image-wise. Then of course there was the space between what the participant thought was happening and the illusion shaped by the artist and captured by the camera. This series of variables resulted in a number of wildly different photos, each one fascinating in its own way, as the space between the artist and the participants was continually renegotiated. 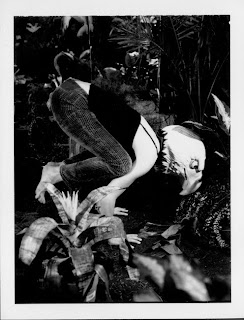 A Study in Portraiture (Susanna) – by Heather Cantrell

It takes courage to leave space – it’s risky. Silence or emptiness can be boring or uncomfortable, signifying that we don’t have anything to say or draw or to express. One has to be very confident in the power of one’s words and images in order to be silent and let space speak. It requires giving up some degree of control and flirting with possible failure.
Much like the importance of leaving visual and conceptual space in an artwork, one of the things I’ve learned about teaching a powerful yoga class is knowing when the silence can be as significant as the words. Newer teachers sometimes feel the urge to clutter up the space with too much language – a barrage of verbal instructions and explanations. You have to sculpt the space, making your words strong enough so that the silence offers a counterpoint, a pushing back at the sound. This is like the positive and negative space for me in a drawing. 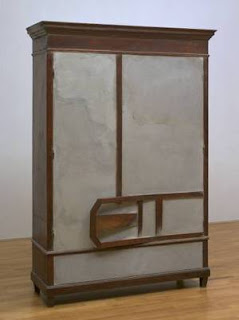 Doris Salcedo
Certain highly skilled artists use the denial of space as a strategy. The artist Doris Salcedo packs the negative space of ordinary pieces of furniture with cement, creating a glacially solid unyielding non-space. Where there should be space there is none. And it reads as terrifying, suffocating. The lack of space between things is painful in these pieces because it does not allow for possibility, growth, or change. It is denying of life.
In the yogic practice of pranayama, or breathing exercises, we talk about the pause between the breaths. That moment when an inhale shifts to an exhale or the exhale to an inhale. It is a space of change, possibility, and transformation. We expand to release and release to expand. This pause is a place, a room, a world that we can inhabit and in which we can meditate. That moment of suspension between the breaths is a place of unlimited potential. It is an oasis, an opening that is always there waiting for us to return.
I do not know which to prefer
The beauty of inflections
Or the beauty of innuendoes,
The blackbird whistling
Or just after.

From Thirteen ways of looking at a Blackbird