I am standing with Babu outside our friends’ home a few summers ago.

It is just after sunrise and a dawn Ganesh puja performed in honor of their marriage later that day. Now nothing can be heard but the early morning sounds of crickets and birds. “Do you remember this?” he asks, holding up his iPhone and pressing play on a voice memo. There are shuffling noises and then the sound of a man chanting in Sanskrit. It takes me a moment to recognize that he is speaking the 108 names of Ganesha. Some friends have begun talking next to us so we both tilt an ear toward the phone and listen to the rise and fall of the priest’s reedy voice. Our friends’ conversation falls away.

It is two years earlier and a group of us are in an almost-empty Ganesh Temple in rural Swamimalai, South India. The grounds are sleepily overgrown and a couple of humpbacked cows are chewing at some grass sprouting from the stones of a courtyard shrine. A few Indian visitors snap photos of us on their cell phones, curious about the westerners who are also lighting ghee lamps and who are dressed in temple-appropriate attire.

Someone calls to us and we rush to gather in an outdoor area between the stone pillars framing a small white Ganesh. We squeeze between the surrounding metal gates, accustomed, after so many temple visits, to stacking and layering our limbs in any way that enables us to catch a glimpse of the ritual.

I am close to the front, just behind the elderly priest’s back as he faces Ganesh and begins the puja, so Babu hands me his phone, which I hold in the folds of my sari in order to record what ends up being some of the most heart-wrenching chanting I have ever heard. The syllables tumble intricately from the priest’s mouth and are held between the carved space of pillars and people. Some of the sounds work their way into my body while others bounce off of the temple stones to float out into the courtyard air. At the end, I am self-conscious about the fact that I am crying until I see that most of my friends are as well.

Ganesh, Ganesha, or Ganapati, to mention his three most popular names, is the much-beloved elephant-headed Hindu deity. He is often referred to as the remover of obstacles, but a more accurate designation would be the obstacle guy. He is an enormous elephantine being, so is, in and of himself, an obstacle.

Ganesh is about any change that we desire, are going through, or are about to undergo. His enormity makes us look at what may be blocking us in our lives so that we have to deal with it in order to move forward.

For these reasons, Ganesha is often found at the entryways in homes, businesses, and temples, reminding us that every doorway is a moment of change, delineating where we are, where we just were, and where we are about to be.

Ganesha is the one we chant to when we have something insurmountable in our lives. He is also the one we turn to in times of transition or if we desire dramatic and decisive change. In the stories, he sits at the threshold and decides who passes and who doesn’t. He makes us look at what is and work to figure out what could be.

As we all know, transformation is tough but it is also deeply sweet. There is a poignancy and a power in something so beautiful that it hurts a little. Ganesha is the marriage of these apparent opposites. An elephant’s trunk can uproot trees, but the tip of it will delicately take a coin out of your palm. 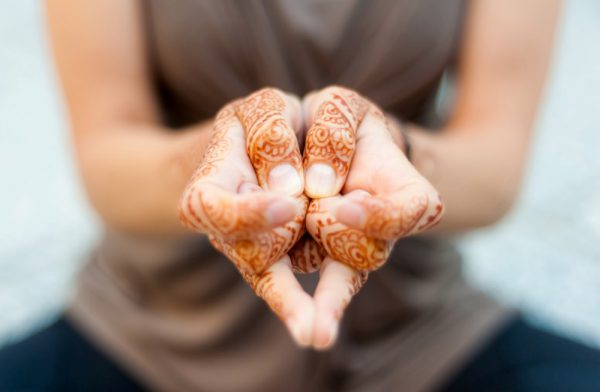 Ganesha is often pictured holding a number of objects, including a little noose, to draw things toward him, and an Ankusha, a little hooked elephant prod, to coax things along or push them away. To evoke the power of Ganesh and transformation, we can practice Mahankusha Mudra, the hand gesture forming the shape of his great(maha) Ankusha, and also resembling his elephant ears and trunk.

A mudra works like this: As we create a mudra with our hands, we seal its meaning or intention into our bodies. Just as with a yoga asana, as we form a mudra, it also forms us. Each mudra represents a particular deity or concept, and when we create it, we create a relationship with what it represents.

Try this: Form Mahankusha Mudra and ask yourself:

What do I wish to create right now? What goals will I set and commit to? And what do I need to push away or release in order to achieve them?

In most representations of Ganesha, his trunk gently curls toward his bowl of ladoos. His huge belly tells the story of his love of these sweets, but it also contains the vastness of the entire universe. “In your ever-changing life, in this always-transforming universe,” his curving trunk tells us, “choose sweetness.” Because if you don’t, what are you choosing?

There is no sweetness without bitterness. No wild beauty without ugliness. No peace without tumult. So wrapped in the sweetness may be the pain and loss of transformation and change. But it all goes together. And the tough stuff makes the sweetness sweeter.