The Beauty of Alignment II 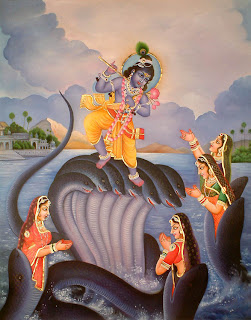 Once, in the town where Krishna lived, a venomous multi-headed serpent named Kaliya took up residence in the local river. Kaliya’s poison had polluted the water so thoroughly that any of the townspeople who went to take a drink, bathe, or even wash their clothing became sickened by its toxicity and died. The poison had begun to creep up the riverbanks, leaving a trail of dessicated grass and plants in its wake, and the cows eating the grass collapsed beneath the withered trees. Everyone was in a panic.

The young Krishna, realizing that he had to take action, leapt into the water, and as the stunned villagers watched, vanished into Kaliya’s thrashing, swirling, vortex at the center of the lake. They waited, fixated on the water’s surface. A few minutes went by in silence. Nothing. No bubbles. No ripples. No movement. The townspeople began to cry in despair. Krishna’s mother fainted and his father began to weep.

But then, in the midst of their tears, the townspeople heard a sudden splashing noise. As they lifted their heads, peering toward the river’s surface and pointing, a smiling Krishna began to rise up out of the water, balanced on one of Kaliya’s poisonous heads. Krishna began to play his flute and dance, hopping from hood to hood, as the dazed serpent slowly swayed, mesmerized by the rhythm. Subdued and remorseful, Kaliya apologized for his violent behavior, explaining that it was his nature, as a serpent, to be venomous. Krishna, acknowledging that it is difficult to control one’s nature, forgave him, requesting that Kaliya move out of the river and into the ocean, where his poison would be less damaging. And so he did.

Invite the story within. Kaliya is a thing out of place – a misalignment. A thing out of place can be toxic, but when placed properly, can be harmless or even advantageous. This is an essential tenet of yoga, and one that my yoga philosophy teacher, Douglas Brooks emphasizes. Douglas frequently points out that it’s called earth outside, but dirt inside. That stuff that looks so rich and fertile in your garden is simply a mess when it’s on your rug.

This can also be applied to your yoga asana practice. The point of a pose is not to make it look like the version of it you saw on the poster, on the magazine cover, or even like the person practicing next to you. The point is to apply the alignment principles to yourself, building the pose from the inside out in a way that honors the particularities of your own body and lets your mind and heart sing. The point is knowing where to put things.

Alignment is a continual process of negotiation and renegotiation. Even when the waters of your everyday life seem still, there’s going to be something underneath – a thought, an incident – that will bubble up. And if it doesn’t emerge from the muck within it’s going to surprise you from riverbanks. The big question is: How are you going to align with the challenges? How will you choose to negotiate the vicissitudes of life so that your challenges lose their toxicity and take a more appropriate place in the landscape of you?