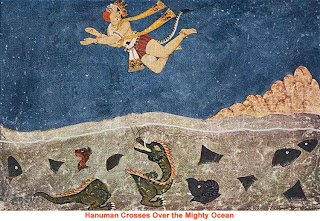 Once upon a time there was an exquisitely beautiful woman named Sita, whose looks and graciousness inspired passion in every creature who encountered her. Sita, however, was madly in love with her partner, a powerful and righteous king named Rama, who was equally crazy about her. One day, as they played and picnicked with their attendants in the flower-dotted fields near where they lived, Sita wandered into the nearby forest to find a little shade. From the treetops, a demon by the name of Ravena, who was obsessively in love with Sita watched… waited…and then leapt down, scooping up Sita and whisking her away to the island of Lanka where he hid her deep inside his walled-in kingdom.
Finding a few of Sita’s glittering jewels on the forest floor, the devastated Rama and his devoted servant Hanuman knew right away that the demon had stolen Sita. Hanuman told Rama that he would leap over the ocean to Lanka to find her, that nothing could deter him from reuniting the couple. Now Hanuman was a sort of demi-god: half monkey and half man, who had magical powers, such as shape-shifting and flying through the air. So Hanuman gathered up his powers and leapt all the way to Lanka, then made himself tiny so that he could scamper unnoticed through the treetops inside of Ravana’s gardens. There he found Sita, weeping under a tree. He gave her Rama’s ring to prove that he was sent by him and then leapt back to tell Rama, so that the king could lead his army to Lanka and recover his stolen love.

So here’s where it gets interesting. Place the story inside of you. You are the landscape – the verdant fields and the shadowy forest, the ocean and the walled-in kingdom. You are the strong king who wants to do the right thing and the exquisite beauty who longs for what she loves. But you are also Ravana, that demon who causes you to feel alone or disconnected, who tears you away from your self. And finally, you are Hanuman, the one who restores unity, who, in fact, is so utterly devoted to creating connection, that he will create alignment again and again and again, because Hanuman is the ultimate yogi, alignment and connectivity are a constant process, and this is one of many stories…

Observe within yourself how the story plays out in every moment in your day. Your mind flickers over a particular thought or desire and waves of excitement, curiosity, self-doubt, and longing rise and subside. When do you feel separate? What makes you doubt yourself or become excessively self-critical? Remind yourself that those alienating sensations are only one character in the story, that just as they attempt to pull you out of alignment, there are other characters in your story that elevate and exalt you. Call on that part of you that is deeply devoted to your own alignment and connectivity. Call on that part of you that is Hanuman.