The Beauty of Language, Yoga, and Paris 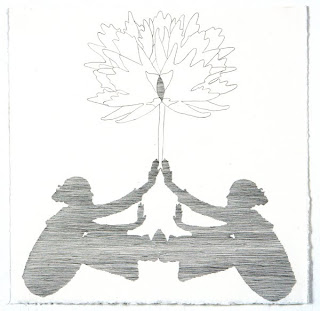 Language connects. Movement connects. At the heart of any yoga practice is the notion of unity, connectivity. We are upstairs at a dance studio in the 11th arrondissement  in Paris – around us are the sounds of various practices happening in the building – the clattering of shoes in the hallway, the drumming from the African dance class coming through the open windows from across the courtyard, faint conversations from the stairwell and the studios around us.  Three of us, representing Spain, Portugal, and the U.S. are assisting my friend Sianna Sherman with her annual Paris Anusara workshop.
Yoga mats carpet the studio floor in a grid. The students stand up, moving from our seated meditation at the front of the room back to their mats to begin the practice. Voices chat and exchange information in French, English, Spanish, Portugese, Swedish, and Italian, and a hybrid patois emerges. The murmur of the French translator serves as a backdrop, but overall, he necessity of communication becomes more significant than the perfect structure of any specific grammatical system. Everyone develops their own way of speaking to their neighbors as the students assist each other in handstand, gesturing and modeling with their bodies when words fail. There are moments of depth and intensity and others of absolute hilarity as words are mixed up and terms are translated. 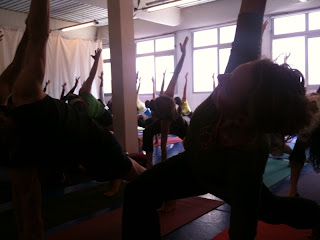 Paris yogis lunge & twist
Bodies shape the space around them – language delineates this from that – terminology designates a pose or an alignment instruction – hands on bodies adjust and move to offer people a deeper sense of connectivity and communication within their own bodies and minds. There is a sense of oneness and unity, but there is also clear diversity and uniqueness. The differences offer contrast, which enables us to recognize beauty in its myriad individual forms: an undulating ocean of particularities. 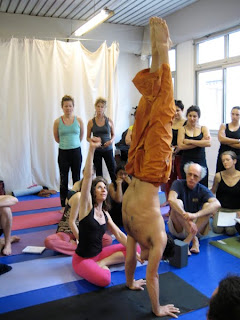 Sianna Sherman & Jason Nemer in Paris
Sianna tells a story of the Hindu gods Sita and Ram, who always long for each other, for connection. They are simultaneously distinct and united, and are often referred to as SitaRam – one word. When we practice yoga or anything that we love, we are affirming connection, creating unity, either within our own bodies and minds or with someone or something outside of ourselves.  In yoga we use language to designate a pose. We use language to refine the alignment of the pose. Then the pose communicates back to our bodies and reverberates within our MindBody. We foster unity through language – the language of words and the language of the body.