The Beauty of the Dance 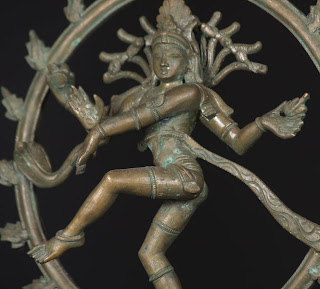 His body is half-naked and ash-smeared with a tiger skin draped across his hips. In his two upper hands he holds the drum of creation and the fire of dissolution. His tangle of matted hair is gathered and loosely held in a knot. Perched on the knot is the pale crescent moon behind which descends the waters of the Ganges, which separate and divert into many tributaries, reflecting his infinite forms. He is multiplicity itself. But here he is Nataraja, the dancing form of Shiva.

As he begins to twist and move, his lower left arm and leg rise, crossing over to the right side, the languid hand pointing gently toward his gracefully upturned foot. He holds a fourth hand palm-out, offering abhaya mudra, the sign of fearlessness, inviting us to dare to engage in our own dance, our own process of creativity. As he dances, his dreadlocks fly wildly out from his head revealing glittering diamonds studding their matted swirling length. They reflect and refract the light, creating a dizzying optical spectacle evoking thousands of white sparkling fireworks. Ash and gem. Nature and culture. Visceral instinct and refined choice. This is our center where our contradictions meet.

Who we were, who we are now, who we may be…it’s all in the dance. The grittiest earthiest parts of our makeup combine with our most refined and cultivated sensibilities, because we contain both. In Nataraja’s undulating asymmetrical dance, he conceals one bit of reality and reveals another because this is the way we experience the world. Something surges into focus, something else recedes like the sound of a train in the distance. He stands on Apasmara, representing forgetfulness, because we remember just enough and forget just enough from day to day so that we get to dance again, tasting our own recalled and forgotten beauty. Nataraja is an invitation to dance our lives more deeply, more artfully, connected to the earth and in love with the stars.