The Beauty of the Unexpected

By Susanna Harwood RubinFebruary 28, 2010Uncategorized
No Comments
Karma and Lila and unexpected beauty
Karma –action, cause and effect, the idea that an action taken sets into motion a series of other actions, occurrences, or events
Lila – chance, unexpected beauty, play, that which cannot be planned, but only hoped for 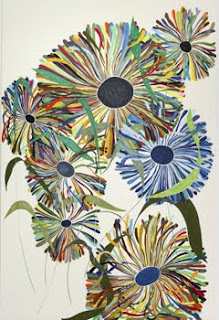 Charles Ray – Untitled 2009
Charles Ray at the Whitney Biennial 1993 & 2010
I was speaking with my friend Jesse who had just gone to the opening of the Whitney Biennial on Wednesday. He said that it was the Charles Ray show – The artist who parked a sculpture of a fire truck outside of the Whitney for the duration of the 1993 Biennial, and frequent creator of shocking pieces. This time Charles Ray was represented by a room of tall gorgeous flower paintings that he previously made only for family and friends and didn’t generally exhibit. There was the surprise and delight of the flowers, and then the surprise and delight of the fact that they were made by a guy also known for a piece called Family Romance – a nude nuclear family, each member shrunk or expanded so that the children and parents were the same height – the nudity of all four holding hands gratingly uncomfortable to look at. But these flower paintings were…pretty…really outrageously pretty. 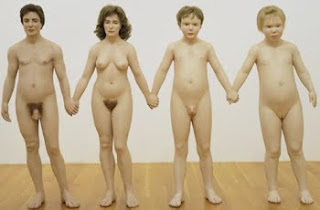 Charles Ray – Family Romance 1993
William Kentridge at the MoMA  2010
We shifted to a discussion of MoMA’s exhibition of the South African artist William Kentridge, who makes scratchy black and white drawings into animations of helplessness and alienation. I mentioned one particular moment in which a middle-aged man in a business suit looks down, watching as water rises up to engulf his pants legs. For whatever reason this image always makes me want to cry. My friend Jesse immediately responded – me too!  But how? The first time I saw it I felt that way and every time I’ve seen it since I have had the same reaction.
Obviously Kentridge did the work, planned it carefully, applied his sensibility to it with care, but what is it about that moment that elicited such a specific reaction in both of us? That degree of emotional connection with an artwork goes beyond Karma, because you can plan forever to make an emotional piece and fall completely flat. Actually that is usually what happens if you begin with such an intention. But because the structure is there, the Karmic thing, the Lila might and in this case DID happen. 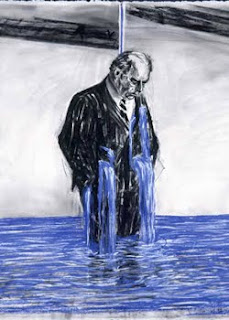 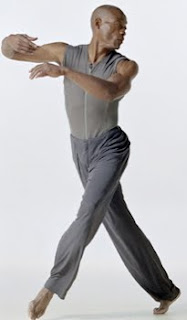 Bill T. Jones – Still/Here at Brooklyn Academy of Music 1994
A couple of days later I was thinking about the introduction Bill T Jones gave at the premiere of his Still/Here, a groundbreaking piece addressing the crisis and loss of the AIDS epidemic. It was a while ago, but this is how I remember it: the ever-elegant BTJ walked up on stage in his tux to introduce the piece. He then brought up his mother, who was tiny in relation to his towering height and wide shoulders.  She was dressed very simply with a flowered dress and hat. Without musical accompaniment, she began to sing a gospel song. Her voice cracked a bit on the higher notes. BTJ began to make subtle rippling movements with his body while standing in place by his mother’s side, reacting to the rise and fall of her voice. She finished the song. The two took a bow, walked off stage, and STILL/HERE began.  I honestly could have walked out before the rest of the performance ever happened. I was already saturated with the intense beauty of the experience. It was elegant and raw, sentimental and disorienting. It drew together an unimagined combination of associations to move me in a weirdly specific way I hadn’t been moved before or since. It felt profoundly authentic.
Karma and Lila and art making
The play of Karma and Lila is a concept essential to art making. Lila isn’t just sweetness or happiness – it is the magic, the unexpected beauty popping up like a late winter crocus through the snow – or a 6½ foot man in a tux making snakily beautiful movement next to his elderly mother singing a church hymn onstage. Or the surprise of a famously shocking artist making pretty flower pictures for his family. Or the resignation of a crudely drawn animated figure watching but doing nothing as smudges of blue water slowly rise up past his knees. And beauty can be pretty or beauty can be gut-wrenching.
But you DO have to do the Karma – you have to have structure and discipline in your art making practice in order for anything to happen. No action = no result. But the idea is that you cannot anticipate a very particular action or a specific outcome. It trips you up and cuts off creativity. Part of what makes great art great is the magic of ‘how did they do that?’  And very few artists can entirely explain how a particular work came into being. We can talk, on one hand, about the materials and techniques used, and on the other hand about the ideas that inspire us – what we were experimenting with or pursuing philosophically. All that is the Karma. But there is a gap. On one side lives the day-to-day business of the matter and means. And on the other side lives the eventual outcome. In the gap is where Lila resides.
So I remind myself within my creative life to:
1. Be authentic to my personal vision and creativity
2. Do the Karma, the work, the action.
3. Embrace the unexpected and the unlikely.
3. Invite Lila without expectation. Stay open to possibility.
“When you’re hoping with expectation that’s Karma.
Hope without specific expectation is Lila.” – Douglas Brooks